‘We will not go back’: thousands rally for abortion rights across the US

Thousands of people were taking part in protests across the US on Saturday to decry the supreme court’s expected reversal of the landmark 1973 law that made abortion legal in America.

Organizers said there were more than 380 protest events in cities including major ones in Washington DC, New York City, Los Angeles and Chicago to demand that the right to an abortion is not stripped away by the court, which is dominated by rightwing justices.

Gathering in large groups and holding signs that included slogans such as “Reproductive justice for all” and “We will not go back”, and chanting “My body, my choice”, the protesters have been spurred by the leak of a supreme court draft opinion on 2 May. The leaked draft showed that the five rightwing justices on the nine-member court had voted to overturn Roe v Wade, the historic case that provided federal protection for abortion rights and proved a beacon in international efforts to improve the rights of women.

In the US capital, protestors gathered at the Washington Monument before marching to the supreme court, which is surrounded by a security fence. Some held pictures of coat hangers to symbolize the dangerous measures some people resorted to for illegal abortions prior to the Roe v Wade ruling. “If it’s a fight they want, it’s a fight they’ll get,” said Rachel Carmona, executive director of the Women’s March, one of the groups, along with Planned Parenthood, UltraViolet and MoveOn that organized Saturday’s demonstrations, which they called “Bans Off Our Bodies”.

“We have to see an end to the attacks on our bodies,” Carmona added. “You can expect for women to be completely ungovernable until this government starts to work for us.”

If the court were to end protections for abortion following the challenge brought by Mississippi, at least 26 US states, mostly in the south and midwest, would be certain or likely to outlaw abortion, forcing women to travel hundreds of miles to the nearest clinic, self-manage abortions with medication and heighten the risk of prosecution, abuse and violence for women and doctors.

Even though a clear majority of Americans support in principle women’s right to have an abortion, the topic has long been a politically toxic one, with Republicans persistently pushing for the protections to be weakened or scrapped entirely.

Oklahoma and Texas, both Republican-led states, have established bans on abortion after six weeks, while lawmakers in Louisiana recently mulled a bill that would charge women with murder should they end their pregnancy. 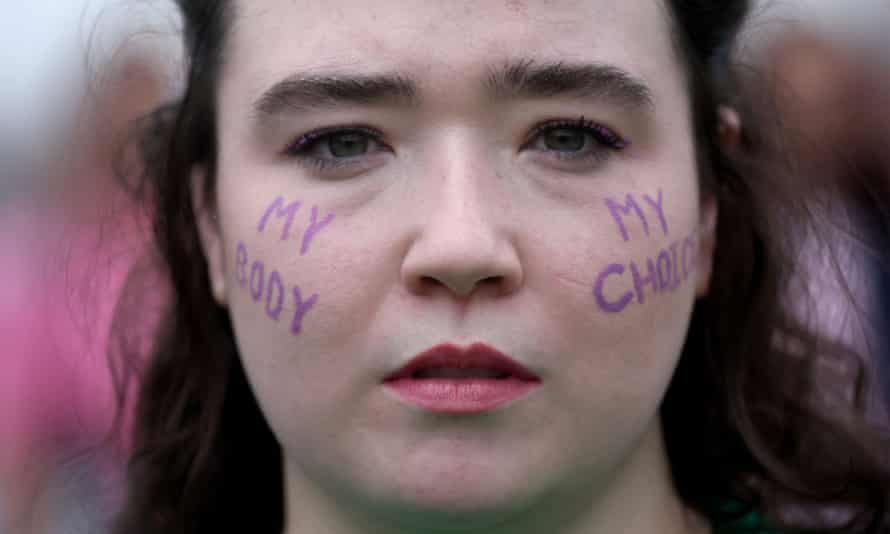 An abortion rights protester at the rally in Washington DC. Photograph: Leah Millis/Reuters

But people at the protests spoke of their alarm over the prospect of losing a right that women have relied upon for the past 50 years. “How can they take away what I feel is a human right from us?” said Julie Kinsella, a teacher who took part in the New York protest. Kinsella said she felt “anger” and “outrage” when she heard the news of the draft opinion.

“It just made me think: what direction is the US moving toward with that decision?” she said. “We have made so much progress up until this point. I would just hate to see us backtrack and fight for what we already have right now.”

Other women shared their own experiences of abortion. Teisha Kimmons, who traveled 80 miles to attend the Chicago rally, said she feared for women in states that are ready to ban abortion. She said she might not be alive today if she had not had a legal abortion when she was 15.

“I was already starting to self-harm and I would have rather died than have a baby,” said Kimmons, a massage therapist from Rockford, Illinois.

At the rally in Los Angeles, Gloria Allred, the women’s rights lawyer, shared the story of how she had an illegal abortion in California in the 1960s, before Roe v Wade.

“I was left in a bathtub in a pool of my own blood,” Allred said. “A nurse said to me, ‘I hope this teaches you a lesson.’ It did reach me a lesson, but not the one she wanted. Abortion must be safe, it must be legal, it must be affordable, it must be available.”

Barbara Lee, a Democratic member of Congress, also told the Los Angeles crowd of her own pre-Roe abortion, which happened when she was a teenager. “We’re here today to tell these radical extremists that if you criminalize people for having an abortion, if you make abortion illegal, if you take away our rights to make our personal decisions about our bodies, we will see you at the ballot box in November,” Lee said.

The prospect of looming bans on abortion in dozens of US states has provoked international, as well as domestic alarm. On Saturday, Dr Tlaleng Mofokeng, the United Nations special rapporteur on the right to health, told the Guardian that the US should not drop federal protections for abortion.

“It sends chills down my spine to think that the court is being brought on to play – as a very powerful player – to decide on an issue of human rights that has jurisprudence, and has a basis in legal findings, that will actually lead to restriction of rights,” said Mofokeng.

The primary concern of Clarence Thomas, however, appears to be the leak itself. Thomas, a conservative supreme justice, said the release of the draft opinion to Politico was “tremendously bad”.

The judge, whose wife Virginia repeatedly urged Donald Trump’s chief of staff to take steps to overturn the 2020 election won by Joe Biden, told a conference in Dallas: “I wonder how long we’re going to have these institutions at the rate we’re undermining them. And then I wonder when they’re gone or destabilized, what we’re going to have as a country.”